How do you conquer a spirit of negativity? Not up and clear statements, just a regular attitude towards certain people or certain things. Why does it permeate and spread so quickly and so deep? What if I can't do anything about the source? Like a muddy rain that keeps coming, trickling down the face of the everything, making them all tan and brown. I can't get at the sky to make it stop raining. I cannot clean the air to keep it from being full of dirt. All I can do is pray for God to blow the dust away and then wash the car... again. 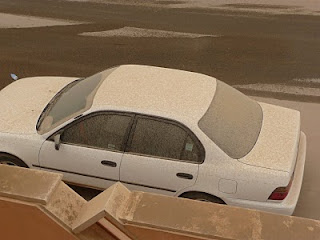 All I can smell right now is dust. I taste dust. Fine, tan, everywhere dust. The world is sepia with ten feet of visibility. Our car was white and clean at two this afternoon. By five-thirty it was splotchy tan. Now, by nine o'clock, there is nothing white left. I'm considering starting a garden on the roof.
Posted by thebeloved at 12:14 PM 2 comments:

An Idaho State Sweatshirt suddenly showed up in my class! 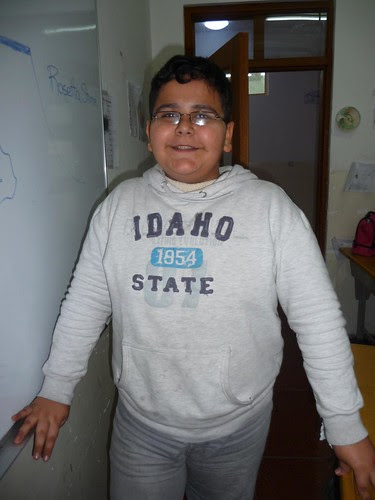 An Idaho State Sweatshirt suddenly showed up in my class!, originally uploaded by thebeloved.

I'm from Idaho... I live halfway around the world from Idaho. So, you can imagine my surprise when one of my students has a sweatshirt that reads "Idaho State" on it. I stopped halfway through a sentence and asked him where he got the shirt. He got it here somewhere. How odd. Maybe the world is smaller than I thought! 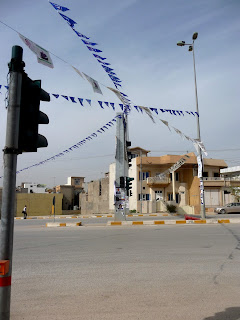 People in the States get annoyed with campaigning and elections. I know I did. All those commercials, all the news media. Well, even here you can be thankful. Be thankful that half the city's populations doesn't spend all night driving slowly, honking, and waving flags in large groups. Be thankful that banners and posters don't plaster every wall, or that flags and fliers don't drape every light post. 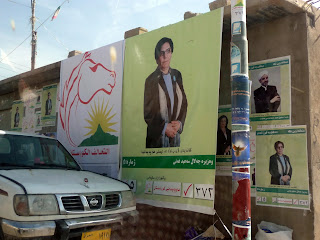 So I've been telling my kids some stories lately of when I was a kid and their age. They've loved them. Most of it seems normal to me, of course... but they are fascinated. It makes me a real person to them and hopefully teaches them some of the things I've learned. But I can't spend all my class time telling them stories of my life. One of my students suggested that I write some of the stories down. So, I'm going to give it a try. I'll write and print them out here and staple them together and sell them to the kids. (Even basic photocopies are more expensive here than in the States.) They sounded interested and excited. Now I know what to do with all my "free time"! Funny.
Posted by thebeloved at 10:43 AM 2 comments:

I was feeling frustrated and tired today. I felt like giving up and wondered if I really was where I was supposed to be. Then I read this. "The place where your deep gladness and the world's deep hunger meet"... That's where I am! I lose track of time each morning and prefer being at my work even while I'm really sick. And I do meet aching needs... sometimes it's a hug to a little girl, or a smile at a student who feels alone, or opening and engaging minds that will shape the future of this country and region. Even if it isn't big, it is my "deep gladness".

"If you're not sure what to do next, consider Frederick Buechner's advice. He says to search for your vocation at "the place where your deep gladness and the world's deep hunger meet." You know you've found your own deep gladness when you lose track of time when you're engaged in your work. You know you've found work that meets the needs of an aching world when you discover ways that your work can bring comfort, help or healing to others."

On the Death of Dreams

The day of the newly well...

I washed the howsha today. (That is our tile patio.) Coldness, water... it was a little hard to get myself going into the job. But, once I got going it was fabulous. I love a bit of physical work. Being a teacher is so mental most of the time. I also helped tidy up our house a bit. Last night the power went out. It's really hard to clean up in the dark, so we just left it for the next day. I also built a little bookshelf for my schoolbooks using a board, a pillowcase, and bricks. These bricks are monstrous and heavy... especially four at at time. But I like my bookshelf. I made pizza today too... what else... some grading. I might not have been so productive with the rest of my day if I had not been procrastinating from reading some of my students legends. Fifth grade ESL writing makes me unable to speak English. All week I've been having to re-say things so that they actually make sense. Walked to the grocery store... or rather several convenience stores. Bought butter, margarine, cheese, toothpaste, coca-cola, bread and matches. No napkins made an appearance or I would have bought them too. Kurdistan is a run-on sentence. Thus my sentences also have become rather winding and pointless. =) It is a funny thought. Xwat legal!
Posted by thebeloved at 12:30 PM No comments: