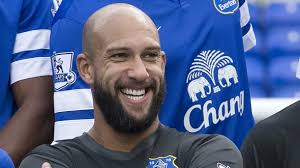 I've really enjoyed watching the World Cup this year. I got into living overseas, four years ago, and it didn't wear off in the last two years in the US. The game between the US and Belgium was so much fun to watch, despite the outcome. The most of the press in the US has been on the fantastic goalie, Tim Howard, and rightfully so. He's amazing. His saves were fantastic. At one point the announcers said that he had not once dove in the wrong direction. All that, and he's good looking!

The aftermath of it, at least for him, is an incredible jump in celebrity status. He's trending on FB. He spoke to the president, along with the team captain Clint Dempsey. You know you've gotten into the big league if the president calls you AND films himself while doing it. I mean, wow.

The articles have been, as a whole, very positive. Even the captain of the Belgian team has respect for the play of Tim Howard. But there's something about all of this that I don't understand. Suddenly, there are also articles about how Tim Howard's a Christian and it's all shocking and wow, I bet you didn't know. What's up with that?

I'm all for supporting your team. As a Christian myself, I know that other Christians are my family. But the sudden interest in his faith seems, disingenuous. It's like we only care if he's a Christian once he's famous. Either that, or there's the idea that because he's a Christian and famous that I'll get some fame because I'm a Christian? I don't know, really. I know that's not what people were thinking when they wrote the articles, but I can't help but feel that its false boasting or something.

Maybe I'm wrong to be a little annoyed by these things. I mean, I'm glad he's going to Heaven and all; I'm happy when my family succeeds. But are we happy to know about believers who aren't succeeding on the earthly stage? Are we willing to identify ourselves with them as easily? Do we Christians just as excitedly claim them as part of our "team" as well? Or does our embarrassment over our less flashy relatives really mean we disown them and send them into exile.

I know there's a balance. Modesty is required for the unpresentable parts of the body of Christ. But somehow I don't think earthly success and celebrity is really the measure of a man.
Posted by thebeloved at 8:59 PM No comments: