Sometimes you read two passages next to each other that you never have connected before. Then something happens. You realize in a flash that they are sort of similar. Then the dominos keep falling and suddenly they are both about the same thing at the heart.

Both passages begin with a feast. In the first, we have the feast commemorating the weaning of Isaac. In the second, the feast is for Herod's birthday. Both feasts are not the point but rather the catalyst for something to happen.

At the party for Isaac, Sarah decides that it's time to kick out Hagar and Ishmael and Abraham does. The earlier born but "backup" son has to go to make way for the true child of promise. His expulsion is ugly and brutal and feels utterly unfair.

At the party for Herod, Herodias decides that it's time for John the Baptist to die and Herod follows through. The earlier born relative and prophet came to prepare a way for the true Messiah of promise. His death is ugly and brutal and feels utterly unfair.

In both stories, the feast is the beginning of something important. In both, the someone is moved out to make way for the true promise.

This contrasts with John and Jesus, both of whom are killed. The earlier story is only playing pretend. It doesn't know the seriousness of what it will become. 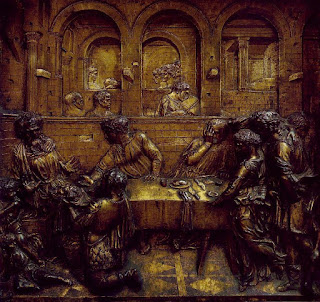 Posted by thebeloved at 8:56 PM No comments: