I haven't posted for a week and I hadn't even realized it. I have not been really busy, but more of my life takes place face to face when I am in the States. Instead of e-mailing friends I call them up and we go out for coffee. Instead of scheduling Skype calls with my family we sit down together and play a game on a whim. Thus, my computer sits neglected and forgotten.

I have to admit that I don't miss it. I think lots of things we spend our time on we wouldn't miss if we had found something better. Sometimes we have found something better we just don't realize it. For example, I didn't miss TV when I first left my parent's home. My roomates and I didn't get TV channels and life was perhaps even nicer with books and real people instead of the flashing light box.

So, I haven't missed my computer or spending hours reading e-mails and checking the news. I know I will go back to that when I move back overseas this fall. For when I am there, that lifestyle is the way to communicate with my dearest friends and my wonderful family. But for now, for me, things like sight, touch, and smell are gifts much too beautiful to give up for telephone calls and feelingless typed words.

So I saw the Harry Potter movie...

The things I continue to notice...

Our silverware here in the U.S. of A. is fabulous. It doesn't bend at a 90 degree angle very easily at all. For those of you who have seen The Matrix, I am certain that they used Kurdish metal eating utensils for the "bend the spoon" tricks.

In addition, we have spoons that will fit in your mouth. In Kurdistan there is one size of spoon, it is generally the size we would use as a small serving spoon, just a bit larger than a tablespoon. Ahh... revel in your instruments for eating! They are a great blessing.
Posted by thebeloved at 1:15 AM 6 comments:

After so many years I still don't get it...

And now is the time to pray. It is sad how I only value prayer as much as I ought to when it is the only thing left I can do. Really I should go to it first, but somehow it seems that I try other things first. Why do I do that? And then things become a mess. It isn't my fault really, but I regret spending so little time in prayer over it all.
Posted by thebeloved at 1:38 AM 4 comments:

There was a man on the Areopagus that day that really struck me. There were other people there too, but this man wasn't part of some tour group or a tourist or anything. This man, whoever he was, made me think. He was most likely drunk or high. As he tried to talk to us his speech was garbled such that I couldn't tell if he was speaking Greek or something else. He seemed king of friendly, but my female companion and myself know better than to get mixed up with drugged foreign men. All in all, though, I was intrigued with the thoughts of what St. Paul would have done had he been there now, in this modern day. This man was the kind of man that Jesus gathered up, that the disciples would have healed, that Paul might have preached to. This man was here, on the Areopagus, and this city was stretched out before us, and they were both lost. What would Paul have thought standing there almost 2000 years later? What would Paul have done for this man? It seemed both hopeless and inspiring. 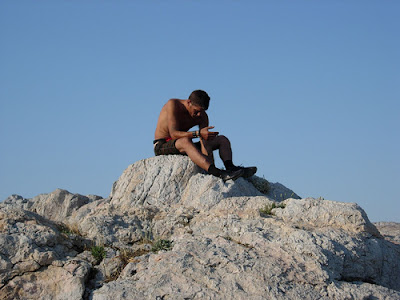 Paul's speech on the Areopagus (Thanks to blueletterbible.org [RSV])

The God who made the world and everything in it, being Lord of heaven and earth, does not live in shrines made by man, nor is he served by human hands, as though he needed anything, since he himself gives to all men life and breath and everything.

And he made from one every nation of men to live on all the face of the earth, having determined allotted periods and the boundaries of their habitation, that they should seek God, in the hope that they might feel after him and find him. Yet he is not far from each one of us, for 'In him we live and move and have our being'; as even some of your poets have said, 'For we are indeed his offspring.'

Being then God's offspring, we ought not to think that the Deity is like gold, or silver, or stone, a representation by the art and imagination of man. The times of ignorance God overlooked, but now he commands all men everywhere to repent, because he has fixed a day on which he will judge the world in righteousness by a man whom he has appointed, and of this he has given assurance to all men by raising him from the dead."
Posted by thebeloved at 4:31 PM 2 comments:

How Rare Is Your Personality?
Posted by thebeloved at 1:13 AM 5 comments: